My name is Thomas Kuzma and I’m here today with my good friends Emma Gallagher and Amy Smith. We’re talking about the #metoo movement, relationships and consent.

THOMAS: The #metoo movement has recently made the world ask itself questions about consent. What we haven’t heard however is the autism side of this matter. Speaking from your experience, what does #metoo mean to the two of you and others on the spectrum?

AMY: Unfortunately, like many other women I have a #metoo story. In many respects it was a story in which I could see that it was an intersecting correspondence of a predator noticing that there was a certain social naivety that I had. Obviously, he wasn’t aware that I was on the spectrum but could tell that I was someone for whom social niceties and understanding social queues was a problem and that was why he sought me out. It was really tough too because I was at an event where I had my first foray in the Sydney Alternative Scene. So, I was there wide eyed and wanting everyone to like me, he could smell that a mile off, like any predator really.

Looking back now I can see that while it wasn’t my fault that it happened, and talking with a lot of friends on the spectrum, specifically women, they have had similar instances. They recalled it as bad, as being in abusive relationships because they couldn’t see the red flags. I think the #metoo movement really helped in putting it out there that this did happen to me and that we need to come together to look out for each other; particularly if there is someone like myself who has more chance of being put into a dangerous situation.

Which is why I believe it’s become important for us to bring to the forefront for young women in particular the need to understand red flags, they need to be sure in themselves as people so that they don’t fall victim to it. Unfortunately, it is going to happen, there are predators out there but for them to get out of harms way and for them to know that they don’t have to be pushed into anything that they don’t want to do, which can happen a lot because these young women on the spectrum want people to like them. I feel that #metoo has really started that conversation.

EMMA: I found the #metoo movement quite empowering for me and for other people on the spectrum. Declaring #metoo online has encouraged myself and people on the spectrum to come forward and talk about their instances of coercion, assault and abuse. It has been a good cathartic experience to get discussions going and to start taking the steps to address these issues in our community.

THOMAS: I can see what you mean. Back in 2013 I misunderstood the terms of a relationship with a woman, so I asked her friend to help me become a better person. They ended up transforming me into someone that wasn’t me but was an attractive person in their eyes. I hadn’t really changed as a person other than I had a new look. This lead to that friend taking advantage of who I was. What I realise now is that what is important is that I need someone to like me for me. If they like me for who I am, they’ll want me to be comfortable rather than take advantage.

I realise now that I don’t want to put anyone through that situation. Being on the spectrum, you need to know where the line is with each person, boundaries wise.

AMY: I think that’s important to ask yourself. Everyone has boundaries and that’s not just for your relationships, but in all our interactions in life especially for us on the spectrum where social behaviour isn’t as inbuilt. It’s more in the front of our mind, and through experience and learning we do acquire the knowledge on this behaviour. With that we develop our own black and white mentality on what to do and what not to do.

EMMA: I think it’s also important to know that the line of consent is different for everybody. People on the spectrum have a very patterned way of thinking. This affects the way each relationship comes through. Boundaries change with each person so it’s a skill that needs to be empirically taught and there has to be a good level of communication between each person.

THOMAS: It’s funny you mention consent Emma. We live in a world where romantic freedom and consent live in this large Venn diagram. What can autistic people do to improve consent in relationships?

AMY: Something I have been encouraged by is a big push for more verbal, enthusiastic and freely given consent. Like many people on the spectrum I struggle with non-verbal queues and of course as a woman there’s societal expectations that I am not the initiator, it’s the guy. I generally prefer that the guy initiates anyway, I’ve tried to initiate plenty of times and have made many embarrassing situations.

In the relationships that I have had with guys on the spectrum I have discovered that they would ask me if I was comfortable, if not please let me know. I was always really happy about that because there’s a certain tenderness to it. It means they are looking out for you, it means that they are respecting you which is always really healthy and helps me know what I want. I can freely say “yes” or “no” in that situation and I know that with that person it is safe to do so.

One relationship I had with someone on the spectrum started with him turning around and saying, “I’m not entirely sure what it is that’s going on between us”, basically making it clear that he liked me. He went on to say “ I am absolutely terrible at initiating this sort of thing, but you’re a very lovely girl” That was very sweet, and it helped me see his intentions were abundantly clear, that he wanted to know that I felt the same way.

So many people would look at that and say “That’s so mechanical” but for someone like myself who needs someone to make their intentions clear, to openly & verbally communicate and make it so that I can be comfortable in either saying “yes” or “no” and their reaction would be the same either way. To see that being discussed and being normalized rather than relying solely on hidden signals and nonverbal actions is really encouraging. It makes a young single woman like myself feel safe and comfortable to go back into dating.

EMMA: I find what Amy said to be interesting. For me in a relationship there are 3 key components that go into consent. The first one being clear direct verbal communication, without all the innuendo stuff that seems to be very rife in relationships.

For people on the spectrum, all that innuendo and double meaning stuff goes STRAIGHT OVER THE HEAD. We don’t get it. If you want to move the relationship forward or do something with me, ask me in clear precise detail what you want. Don’t ask “Do you want some hanky panky”, ask “Do you want to have sex?” by asking to have sex you have that key component to it.

The second part, and Amy touched on this, is enthusiastic consent. It’s not about somewhat saying “mmm, okay”, its more about saying “Yeah! Let’s do this kind of thing”

The third thing in all this is trust. Being able to trust that person and their reaction to you saying “yes” or “no”. If you can’t trust that person, then there isn’t just an issue of consent, it’s an issue of whether or not you should still be in that relationship because that’s not someone you can trust not to cross the line. 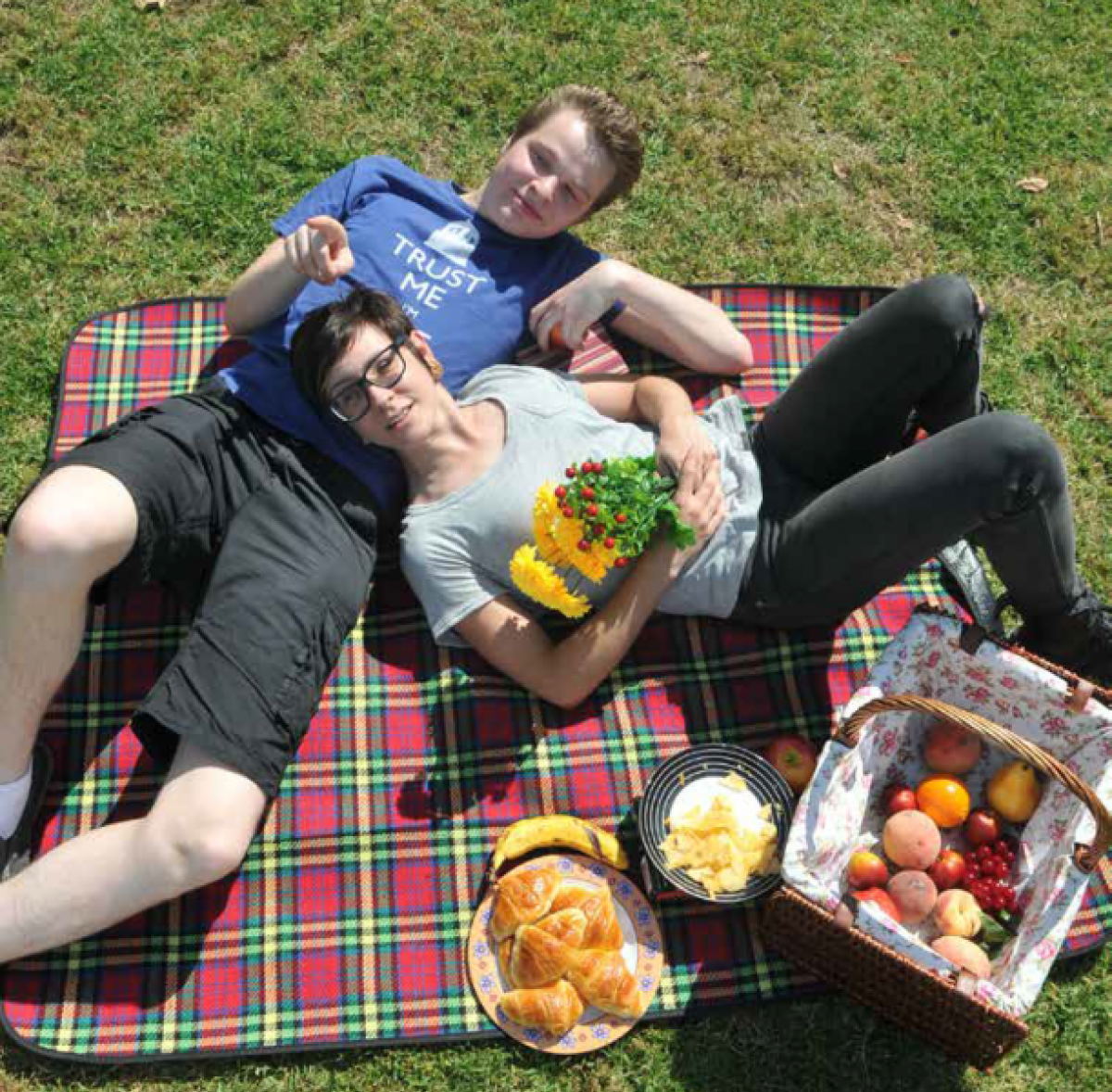 THOMAS: I love that you brought up trust, I find that in the happiest relationships that I have had, there has been trust. I have felt comfortable enough to be in the relationship. Sadly, I have a history of spanners being thrown into the works because I end up single again 3 weeks later. What I did want to go into however was about trust and relationships. What can people do to build trust in relationships that involve people on the spectrum?

AMY: First of all we are people who are honest to a fault. Not only do you need to be clear about your intentions, about your feelings and your communication, but you would need to be okay that we will also be blunt and honest. That is 100 percent the foundation that needs to be established, with that level of honesty you can create an environment where the person can be safe to say “yes” or “no” and to communicate their wants, be it sexual or non-sexual. That’s the basis for any relationship or friendship.

When I have been with Aspie men, trust has been very easy, establishing what our needs and wants are and how we communicate. I remember one boyfriend that was worried he would make me feel uncomfortable, I kind of snapped back at him saying “If that was the case, I would straight up tell you”. He was relieved to find that out, because he realised that I was someone that he could trust and be honest with him. It sounds easy but it can be tricky because we are conditioned to be polite, to be nice to the point where we are discouraged from being honest. That’s really dangerous because then you can’t establish trust.

EMMA: Honesty is a big starting block in building trust so when someone says to you that they are not happy with you, that that is appropriate. For me the biggest way to build trust in a relationship with someone is testing the waters when you start dating.

See if they respect you with the little decisions you make, whether it be your choice for dinner or respecting the fact that you don’t want to watch a horror movie because you hate horror movies. That’s not all, it is respecting that even though you two may make plans to go somewhere, only to have you pull out on the day because you are not coping with X, Y or Z.

THOMAS: You know I have no clue where trust lies for myself, but you two have given myself and the readers a lot to think about when it comes to trust and relationships, not just the romantic ones, but the regular ones too. Thank you for your time!

EMMA: It’s been a pleasure.

AMY: Likewise, thanks for the interview.

Never judge someone without knowing the whole story

I know it is hard to believe, but, a few weeks ago, while I was in a bathroom at Melbourne airport, I had a complete stranger remove my headphones from my head and shout at me. I’m Autistic, my headphones are noise cancelling and without them, I simply cannot endure noisy places, especially airports or bathrooms. Here’s the story.